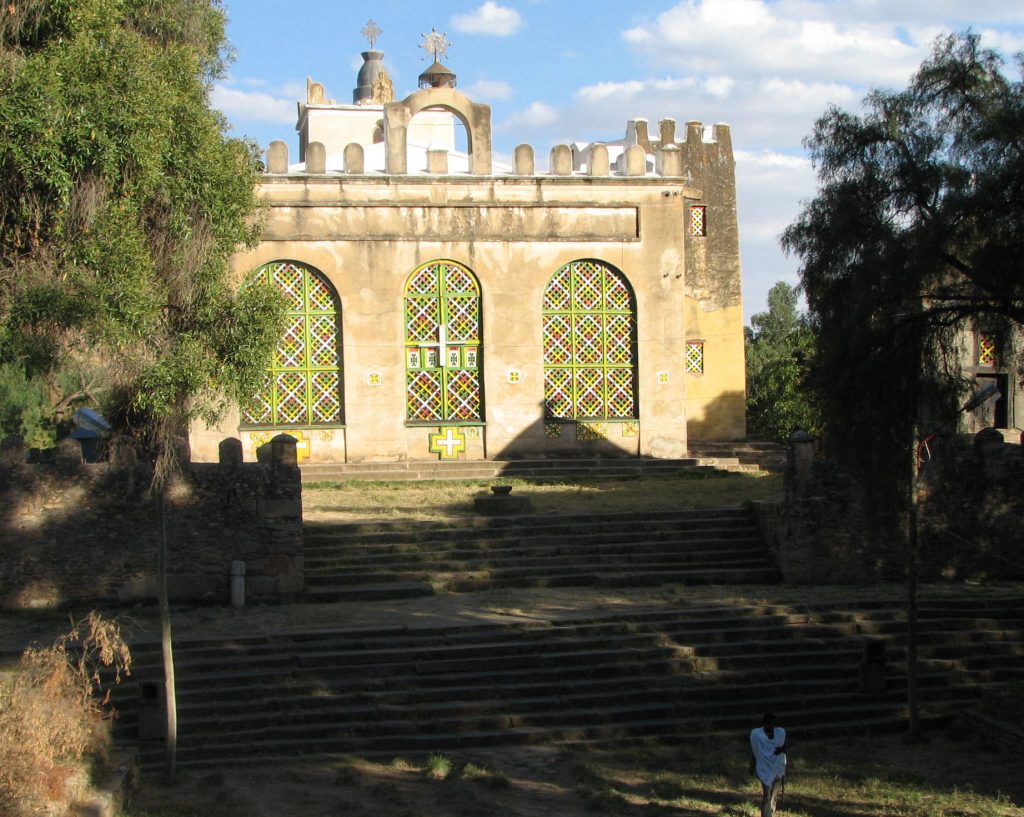 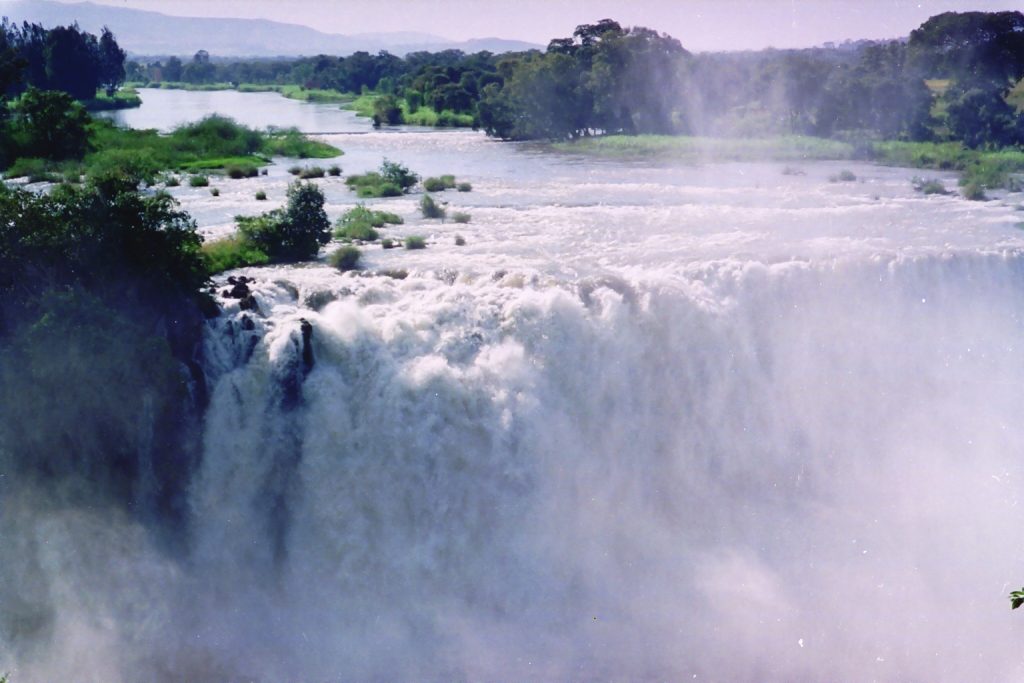 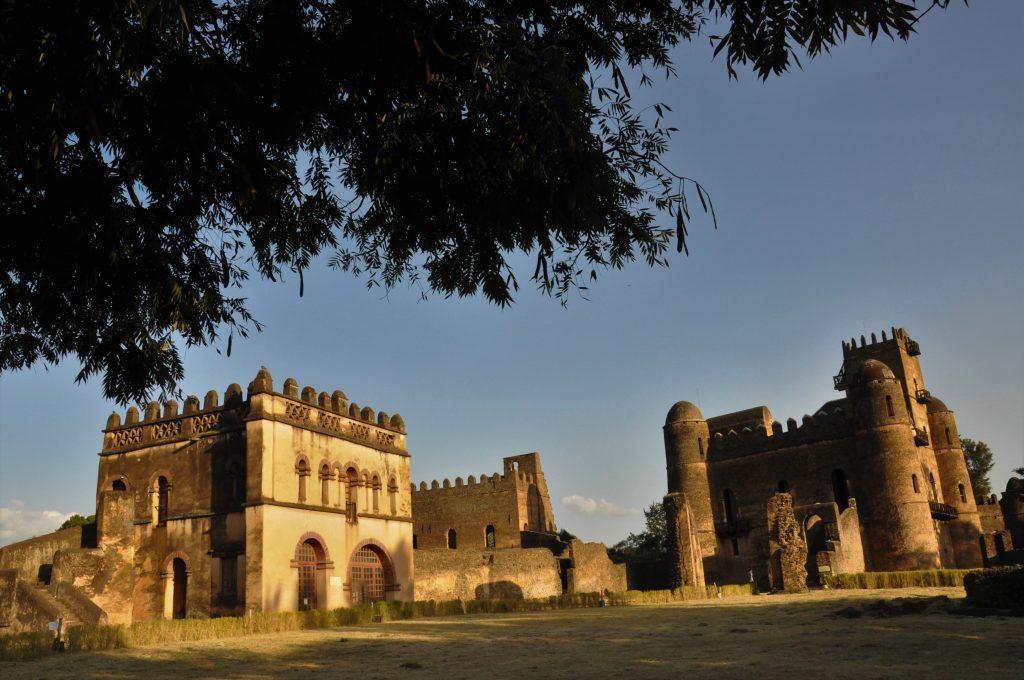 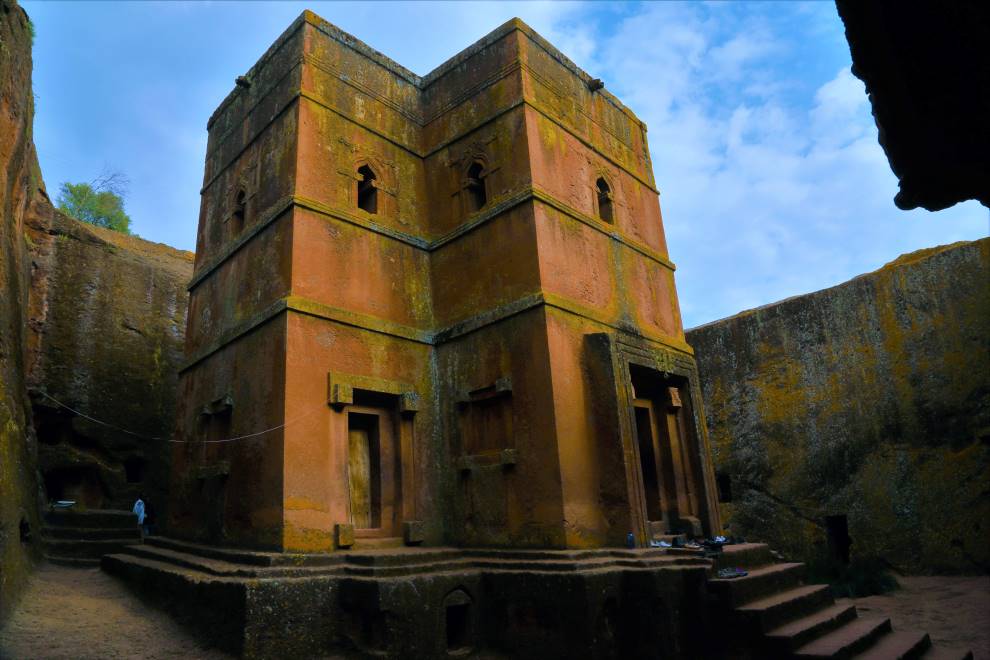 This 11 day tour discovers The Antique land of Ethiopia with 3000 years of history. Discovering civilisations of Axumite and Zagwe Dynasties, Rock hewn churches of Axum and from Lalibella to the Simien National Park known as the Roof of Africa!

Gondar - known as "The Camelot of Africa

In the morning, fly to Mekelle. In Mekelle, we will visit the Palace of King Yohannes. Later, we will drive to Gheralta. On the way to Gheralta we will start visiting the Tigray rock hewn churches with the visit to Wukro Cherkos Cluster. Our first visit will be to, Wukro Cherkos rock church which is found only 45KM north of the city Mekelle. The church is almost a monolithic except its eastern side. It has a finely carved pillar that comes into view in the anteroom which is beautified by morals from the 15th century depicting angels and saints Further drive on the road to Hawzein and visit the rock hewn church of Abreha Atsbeha. Abreha Astbeha is considered among the country`s earliest churches, it is known for extraordinary interior decoration as well as its magnificent murals. Its ceiling is decorated with sophisticated patterns and its walls are dotted by curved crosses. More than a dozen of enormous columns divide it interior of the church into several bays and aisles. Without doubt, Abreha Atsbeha is a rock church masterpiece. According to local tradition the church was constructed in the 4th century, but some scholars estimated its date of construction to be the 10th century. What is certain is it is built well before the famous rock churches at Lalibella where the level of sophistication of rock architecture reached its peak.

In the morning drive to Dugum and trek to Abune Abraham a couple of hours walking from Dugum, the Abune Abraham Debre Tsion church which is elaborately decorated with 16th century murals paintings. The church's ceremonial fan dates back to the 15th century and consists of 34 parchment panels, each painted with a figure of a saint. Picnic lunch will be in Dugum, Afternoon trek to Yohannes Maequddi which is best known for its ancient and well-preserved paintings

Drive to Axum and visit Axum Obelisks. On the way to Axum visit Yeha Temple. This simple frontier town is in fact a city of great importance as the ancient capital of Ethiopia. According to local legend, Axum was home to Queen Sheba and the current resting place of the Ark of the Covenant. As we explore Axum, and its ancient relics, our sense of adventure and imagination guides us through this mysterious and historic place. After breakfast drive to Axum on the way you will visit the 6th century church which is found on top of a hill and built on the old Axumite architecture and only accessible by leather rope, after lunch you will also visit the 5C BC Temple of moon called Yeha which is one of the old city that are found in sub-Saharan African countries. Later; Visit the famous ‘Stele field’ (4th Century AD and UNESCO World Heritage Site, the ruin palace and tomb of King Kaleb and King GebreMeskel (5th and 6th Century AD) and the residence of the legendary Queen of Sheba (9th century BC). The North Stelae Park contains over 120 stelae, some are upright, some are buried and others have been removed. The Rome Stelae, the tallest at 25m high, was shipped to Italy in 1937 under orders from Mussolini, but has since been returned and re-erected.

We get our first glimpse of the history of this area with a city tour that includes the Archeological museum of Axum and the Cathedral of St. Mary of Zion. The original church was built by Emperor Fasiladas, founder of Gonder, in 1665. It’s thought that this church is built on the original foundations of a temple build by King Ezana or King Kaleb in the 4th or 6th centuries, making this the oldest Christian site in Africa. Keep your eye out for the guarded chapel, which is said to be the home of the Ark of the Covenant. The modern St. Mary’s of Zion cathedral dates from the 1960s when Emperor Haile Selassie had it build. The architectural style is painfully out of place in the ancient city, but the contrast between the buildings on the site is fascinating. We also spend time exploring the on-site museum under the church, which houses many of Ethiopia’s priceless relics (the museum was recently opened to both women and men, photography is not allowed). Afterwards, Fly to Lalibella and visit the first group of rock hewn churches of Lalibella. The small town of Lalibella is situated high in the Lasta Mountains at over 8,500 feet in elevation. Lalibella is arguably one of the most important religious and historical sites in all of Africa and the entire Christian world. Ethiopia was the first country to adopt Christianity as a state religion, and the Ethiopian Orthodox religious practices root lies in Judaism and areas of the country practiced.

There are no less than 200 churches in the Lasta Region of Lalibella, some hidden in enormous caves, but it's exceptional to find 11 churches of such master craftsmanship in one locale. These brilliant feats of engineering and architecture are often referred to as the "Eighth wonder of the world". The churches are said to have been constructed during King Lalibela’s reign during the 12th and 13th centuries when Lalibella (then known as Roha) was the capital of the Zagwe dynasty. Many different theories exist on how they were built and by whom, including angels and the Knights Templars. Legend has it that King Lalibella was exiled in Jerusalem and returned to Ethiopia to build a new Jerusalem. First Group of the churches which represent the earthly Jerusalem. This group includes Bete-Medhanialem (Saviour church), Bete Miriam, BeteDenagel, BeteMeskal, Debra Sina, and Bete Golgotha. Standing 38 feet tall with seventy-two pillars, Medhane-Alem is not only the largest in Lalibela, but it is the largest monolithic rock-hewn church in the world. The oldest of the churches, dedicated to the Virgin Mary, Bet Maryam is the only Lalibela monolith with a porch. The remains of exquisite early frescoes can be seen on the ceiling and upper walls, and there are many elaborately carved details on the piers, capitals, and arches. Bet Golgotha houses remarkable reliefs of figures, early Christian art rarely seen in other parts of Ethiopia.

In the morning, visit the second group of rock hewn churches of Lalibella. In the afternoon, participate on cookery event. Cookery event is a special program where tourists learn how to make Ethiopian traditional dishes and later they will have a chance to taste what they make Second group of the churches representing the heavenly Jerusalem .In this group are the Bete Gabriel & Raphael, BeteMerquorios, Bete Emmanuel, and Bete Abba Libanos Finally, visit the most interesting cross-shaped church of BeteGiorgis (St. George), which is said to be the symbolization of Noah’s ark. The cruciform-shaped BeteGiorgis is the perfect and beautiful church here; its interior is dominated by depictions of Saint George killing the dragon.

Morning fly to Gondar. Afternoon, City tour of Gondar. Gondar, the 17th & 18th century capital of Ethiopia which is popularly known as the Camelot of Africa and up on arrival, you will visit the castle compound: In this compound, there are 6 castles including the oldest and most magnificent Fasiledes castle. King Fasiledes was the founder of the town in 1632 and lead until 1667 where his son Johannes succeeded him. And you will appreciate the architectural style of the castles, Later, the bath of King Fasiledes, the place where the colorful Timket festival (epiphany) is celebrated every year

on the 19th of January and 20th January in the leap year.

Finally, visit the Church of Debre Birhan Selassie, an imposing structure with its harmony of brightly colored ceilings completely covered with intricately painted angels. The church was never destroyed even during the dervishes destroyed many buildings within the castle compound. This colorful rectangular church is known for its 18th century ceiling angles head paintings and wall painted paintings.

Excursion to Simien Mountain. Simien Mountains, that occupies a surface area of 180 km sq. The park, is situated between 4,430 and 1,900 (6,200-4,500 feet), boasts varied flora with three marked botanical areas. The highest parts have meadows with little vegetation, characteristic of Afro Alpine Zones. Here we can find the endemic Lobelia rhynchopetalum, small groups of perpetual flowers, Helichrysum, and striking kniphofia Foliosa.

There are spectacular views across the range from here. Today we see troops of Gelada baboon and red-hot poker

plants en route. The gelada baboon is endemic to Ethiopia and has adapted to living on the nearly vertical cliff faces.

Drive to Bahir Dar. On the way visit Awramba Village and Guzara Castle.

Good morning, today we depart from Gondar and drive to Bahir Dar. On the way to Bahir Dar we will visit Guzara Castle and Awramba Village. “Awra Amba village is founded in 1972 by Zumra Nuru and a group of like-minded people, the village and weaving cooperative of Awra Amba lies to the east of the Gondar road some 70 Km from Bahir Dar. It embodies its founder’s ideal of living in a community where women and men are equal and where all of our children can go to school, where religion and tradition do not dictate every aspect of our lives and where we work collectively, so we can stand a chance of coming out of poverty. “Bradt Ethiopia, Philip Briggs. We will also make a stop along the way to visit the Castle of Guzara, a place steeped in history. This palace was one of the residences of the Emperors Susinios and Za Denguel, where they received Father Páez on several occasions.

In the morning, we will visit Blue Nile Falls. In the afternoon, we will visit Lake Tana Monasteries. Drive 32 km southwest of Bahir Dar to the small town of Tiss Abay and walk for twenty minutes to visit the famous Blue Nile Falls. The Blue Nile Falls is considered by many as one of the most spectacular falls in Africa. When in full flood the falls are quite impressive at 400 m wide and 45 m high. The falls are still an interesting site with some nice bird watching on the easy 30-min walk to the viewpoint. The road to and from the falls is packed gravel and can be rough and dusty.

After having breakfast, we will fly back to Addis Ababa. In Addis we will have half a day city tour. The city tour includes visit to the National Museum and the biggest open-air market in Africa, known as “Merkato”. Finally, you will be transferred to the airport and we will conclude our service.