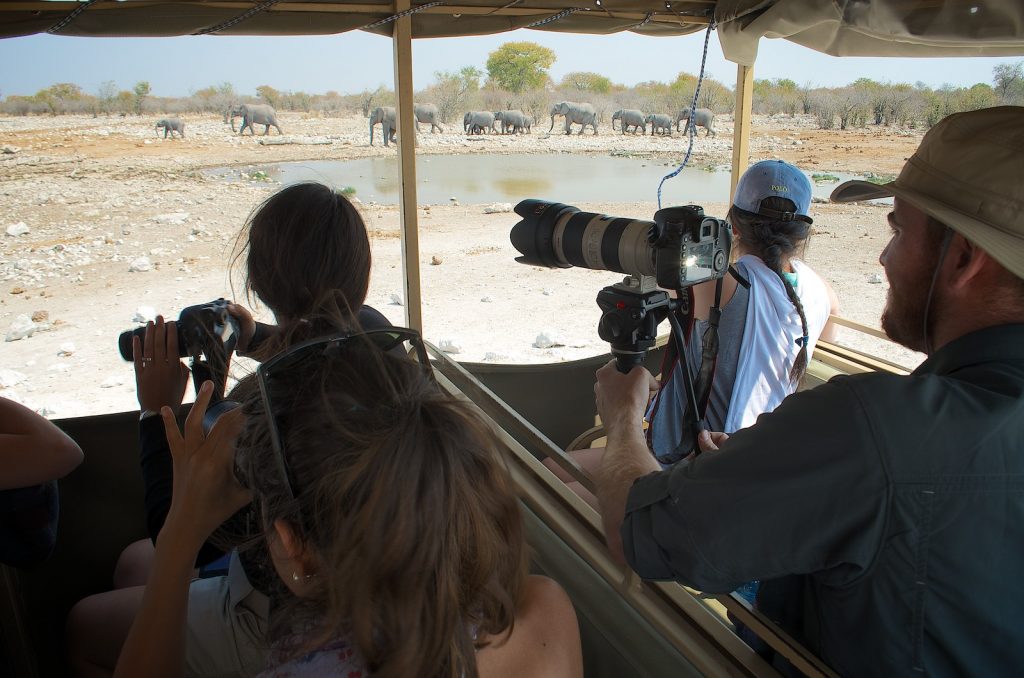 This tour allows you to discover the diverse African culture and abundant wildlife. Your journey takes you through thick riverine forests in the Zambezi region and discover an african authentic safari

Departing Windhoek, we travel north through extensive cattle farming areas and bush land to the Etosha National Park, famous for its vast amount of wildlife and unique landscape. In the late afternoon once we have reached our camp located on the outside of the National Park, we have the rest of the day at leisure.

The day is devoted purely to the abundant wildlife found in the Etosha National Park, which surrounds a parched salt desert known as the Etosha Pan. The park is home to 4 of the Big Five - elephant, lion, leopard and rhino. The Park was proclaimed as Namibia’s first conservation area in 1907 by the then Governor, von Lindequist. Despite the size of the Etosha National Park, only the southern edge of the pan is accessible to visitors. Game viewing in the park is largely focussed around the waterholes, some of which are spring fed, and some supplied from a borehole, ideal places to sit and watch over 114 different game species, or for an avid birder, in excess of 340 bird species. Popular game species such as giraffe, blue wildebeest, plains and mountain zebra, hyena, lion, leopard, antelopes such as kudu, oryx, eland, as well as some of the endangered species such as Black rhino, cheetah and the black-faced impala are all found here. An extensive network of roads links the over 30 water holes allowing visitors the opportunity of an extensive game viewing safari over the stretch of the park as each different area will provide different encounters. (B)

After breakfast we travel north-east towards Namibia’s lush Kavango region. En route we stop at Hoba Meteorite, the world’s largest known meteorite. We continue to Rundu, known for its rich selection of hand-made wooden crafts. With its magnificent woodlands and perennial rivers, the Kavango region contrasts sharply with the rest of Namibia. Large swathes of tall woodland, riverine forests, floodplains and reed-lined channels dominate the area. This is also the area where you will see many of the traditional huts and homesteads still in popular use today. At our lodge we can enjoy an optional sundowner boat cruise on the Okavango River. (B)

After breakfast we follow the route of the Okavango River into the Zambezi Region. Lush, green, riverine – that is what the Zambezi region looks like. This juxtaposition is what makes Namibia the “Land of Contrasts”. The area is typified by perennial rivers and large forests of trees. Whereas most of Namibia is arid, this area is lush, the soil rich and the wildlife plentiful. It is a lively hotbed where one can see subsistence and cattle farming and the well-known traditional wood carvings. We arrive at our lodge on the banks of the Okavango river and close to the Mahangu National Park where the following two nights are spent along the lush vegetation. Our rooms award us with uninhibited view onto the Buffalo Park across the river. Optionally we can visit the Popa Falls, a series of small rapids in paradisiacal environment, or enjoy a late afternoon boat cruise on the river. (BD)

After an early breakfast we travel into the Mahangu National Park. Being Namibia’s smallest but most densely populated National Park, the visit will be rewarding in terms of wildlife and bird watching. The Mahango Game Park has a high number of elephants, as well as fair numbers of antelopes which are scarce or not seen in other parts of Namibia. These include the roan and sable antelope, tsessebe and the red lechwe. The park is also home to a number of sitatunga. The Mahango National Park is an excellent destination for bird watching with over 400 species to be spotted. (BD)

We travel via the town of Katima Mulilo towards the border with Botswana and the end of the Zambezi region. En route we visit a traditional village to learn more about the Caprivi people’s culture. Our lodge for the following nights is situated along the banks of the Chobe River, shortly before it enters Botswana. Having enjoyed an optional Sundowner drink on a river beach setting we return to the lodge for dinner. (D)

Today we enjoy a guided canoeing excursion (depending on current water levels of the Chobe river) to experience the rich diversity of bird and wildlife of the Chobe River followed by a short walk to a spot amidst the shade spending trees, where a light lunch is served. We then return to the lodge either by boat (depending on the water level) or guided walk, experiencing the open African plains scattered with wildlife. The remainder of the day is at leisure enjoying the open space.

After breakfast, we cross the border into Botswana and travel to Kasane where you can extend your holiday at a lodge bordering the Chobe National Park or continue with a transfer to Victoria Falls. (B)

Expand/Close
Is there a single supplement surcharge

Yes, all tours will have a single supplement surcharge. Please ask us for further details