The Moremi Game Reserve is situated in the eastern part of the Okavango Delta, on the south-western border of the Chobe National Park, and covers almost one-third of the Delta.

Its wealth of bird and animal life makes Moremi a prime game-viewing area. Bird life is exceptional and diverse in all areas of the Moremi Game Reserve. During the dry season, the congregation of all species along permanent rivers and waterholes makes Moremi Game Reserve one of the most unforgettable wildlife experiences in Africa.

Described as ‘the jewel of the Kalahari’, the Okavango Delta – a tranquil and isolated oasis set in the harsh and arid surroundings of Botswana’s bush and desert – is widely regarded as one of Africa’s best safari destinations, with its rich diversity of fauna and flora.

The Okavango Delta is one of the world’s largest inland water systems. It rises in Angola’s western highlands, then flows through northern Namibia and finally enters Botswana, where it is called the Okavango. Seen from space as an emerald swirl surrounded by a parched landscape, the delta is a miraculous source of life in a country that is 80% arid.

Depart Maun Airport on your charter flight to your camp in the Okavango Delta. See the world’s most famous wetlands from the skies.

Overnight in the Okavango Delta area. Lunch and Dinner provided

Your next two days will be spent in the Delta. Roam the vast expanses of water from the comfort of a modern motorboat or the traditional way, in a mokoro (dugout canoe). This area is home to a huge number of plains game and is famous for predators. For those wanting to experience the Okavango Delta in an exciting and intimate way, guided bush walks are conducted on a number of nearby islands.

Spend another day in the world’s largest inland Delta.

After breakfast, you will take a charter flight to your next safari camp situated near the Moremi Game Reserve, home to the Big 5 and endangered species including white and black rhino, lion, African wild dog and cheetah. Enjoy an afternoon game drive.

Spend the next two days enjoying day and night game drives as well as seasonal water activities in the Moremi Game Reserve. Your leisure time between game drives will be spent relaxing or alternatively, you may enjoy activities such as mokoro excursions, bush walks or boat cruises. Immerse yourself in this landscape of floodplains and capture unforgettable African moments.

After breakfast, you will be flown back to Maun International Airport for your onward travel arrangements. 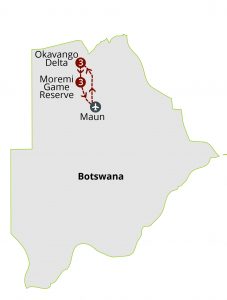